There are many ways a group can make decisions, and it's important to choose the method that is best for the decision that needs to be made. This may be voting, one person decides (usually a 'leader' or another person tasked with that responsibility), a randomised method like flipping a coin, or consensus decision-making. Often in a democratic vote a significant minority is unhappy with the outcome. While they may acknowledge the legitimacy of the decision – because they accept these rules of democracy – they may still actively resist it or undermine it, and work towards the next voting opportunity.

Compromise is another method of reaching a decision, often through negotiation. Two or more sides announce their position and move towards each other with measured concessionary and mutual steps. However, this can often lead to dissatisfaction on all sides, with nobody getting what they really wanted.

Many activist groups use consensus decision-making believing that people should have full control over our lives and that power should be shared by all rather than given to the few to make decisions for the many. Consensus is especially useful when a group is preparing to carry out nonviolent actions with each other because it aims to encourage all to participate and express opinions, and cultivating support for decisions by all group members. To avoid new forms of dominance within a group, its discussion and decision-making processes needs to be participatory and empowering, and consensus aims to do just that.

While consensus implies freedom to decide one's own course of life, it also comes with responsibilities to the collective. The consensus process is based upon listening and respect, and participation by everyone. The goal is to find a decision that is acceptable to all group members, that everyone consents to. Be clear, however, that consensus does not necessarily mean that everyone is completely satisfied with the final outcome, but everyone agrees the decision is acceptable and in the best interest of the collective. It is a decision that people can live with.

Consensus is not a compromise however. A compromise may result in everyone being dissatisfied with the decision, and does not contribute to building trust in the long run. And majority decisions, like voting or 'the leader decides' can lead to a power struggle between different factions within a group who compete rather than respect each other's opinions. The consensus process taps into the creativity, insights, experience, and perspectives of the whole group. The differences between people stimulate deeper inquiry and greater wisdom.

So how does cooperative decision-making work? The opinions, ideas and reservations of all participants are listened to and discussed. Differing opinions are brought out and noted. No ideas are lost, each member's input is valued as part of the solution. This open and respectful discussion is vital in enabling the group to reach a decision on the basis of which - in nonviolent action - people will put themselves and their bodies 'on the line'. 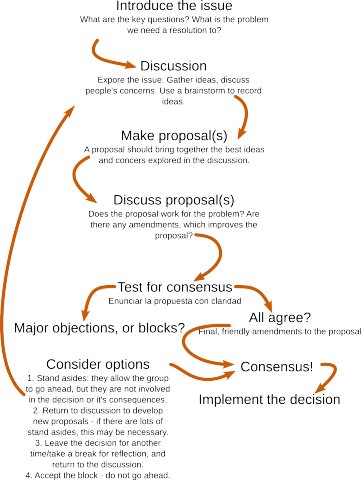 Positions within a consensus decision

Agreement: “I support the proposal, and want to see it implemented.”

Stand-aside: “I cannot support this proposal because... but I don't wish to stop the group, so I'll let the decision go ahead without me.”

Block: “I have a fundamental disagreement with something at the core of the proposal; making this decision would mean the group breaking up.”

Consensus in large groups: the spokescouncil

The model of consensus decision-making described above works well within one group. However, bigger nonviolent actions require the cooperation of several affinity groups; one method to do so is to use a spokes council. The spokescouncil is a tool for making consensus decisions in large groups. In a spokes council, spokespeople from smaller groups come together to make shared decisions. Each group is represented by their 'spoke'. The group communicates to the larger meeting through their spokesperson, allowing hundreds of people to be represented in a smaller group discussion. What the spoke is empowered to do is up to their affinity group; spokes may need to consult with their groups before discussing or agreeing on certain subjects.