To support groups and individuals to recognise how their own social identity does – or doesn't – align with those most powerful in society.

Before the workshop, draw a blank version of the 'power flower' on flip chart paper. You will also need blank copies printed on smaller pieces of paper – enough for everyone to have one each.

Introduce the exercise. Tell the group that they are going to reflect as a group and individually on who has power in society, what the features of the most powerful people in society are, and in what ways we as individuals do (and don't) intersect with those.

Introduce the power flower – each 'petal' represents one social category; for example gender, ethnicity, educational background, economic class, language, geographic region, age group, etc. Facilitate a discussion with the group about what the main features are of the most socially powerful people, identifying the dominant characteristic in each feature (for example, is there a particular age group who tend to have the most power? Where does their power come from?) When the group agrees on one, write it in one of the outer petals. Power could be derived from economic positions, the cultural or historical background, access to policy makers, for example.

When the outer petals are full, hand out the smaller printed versions. Ask everyone to write their name – or draw a picture that represents them – in the centre, and to copy the features from the large version across. Everyone now works independently, writing how their own identity reflects that of the most powerful in society (for example, if an outer petal refers to ethnicity, they write a word reflecting their own ethnicity in the corresponding inner petal.) 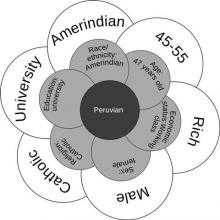 Give five minutes for people to think about and fill in the flower; ask if people need more time, and if everyone is read then bring the group back together. Use what people have identified as the start of a discussion. Which features overlapped? Which didn't? Is there anyone in the group who identified with all of the dominant characteristics? Had they recognised this before? Similarly, is there anyone for whom there is no overlap? How does the group uphold – or subvert – dominant power structures? Is there anything else the group can do to identify and empower those who share little with the features of those with most societal power?