Explain that societies (or towns, or states) include a wide range of groups that can be put on a kind of spectrum, from those closest to the point of view of the advocates to those who actively oppose change. Draw a horizontal line to represent that. Those who advocate change are represented by a point at one end of the line (say, on the left), and the opponents by a point at the other end.

Draw a semicircle with wedges. The wedges closest to either end are the active allies and opponents, next in are passive allies. The group in the middle are neutral. 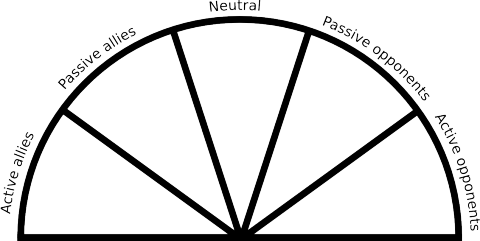 Use the issue the group is working on, or if this is a general training ask for an example of an issue that people in the group might be working on. You can also use an historical example that everyone would know. State an agreed demand we might have, and ask who in society might be inclined to be most supportive, least supportive, or neutral. Give examples of groups: 'unions?', 'poor people's groups?', 'business community?'. As participants identify groups and their location on the spectrum, and write them into the 'pie'. Encourage discussion and reflection. Aim for specificity.

Identify why people are neutral and discuss if there are ways to move them toward becoming allies. Also note where people may already have moved from one wedge to another and discuss why (for example, soldiers and veterans tend to support wars at first, but as the war wages, opposition develops.)

Give the good news: in most social change campaigns, it is not necessary to win the opponent to your point of view, even if the power holders are the opponent. It is only necessary to move some or all of the pie wedges one step in your direction. If we shift each wedge one step, we are likely to win, even if the hard liners on the opponent's side don't budge.

As the group develops its strategy and relevant tactics, encourage them to identify which wedge they are addressing and how they can move people in their direction. In making choices about who to reach out to, ask: