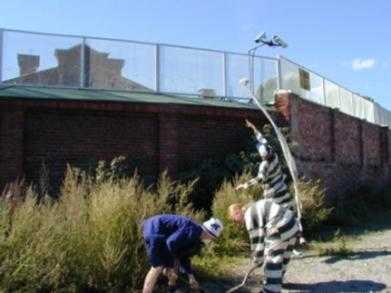 The experience of MOC (Movimiento de Objeción de Conciencia) in helping people in prison is based on the civil disobedience campaign against obligatory military service - the campaign of insumisión 1971-2002 in which thousands of insumisos were jailed. During this period, various ways of supporting prisoners were suggested and tried. One of the most valued, without a doubt, were the 'support groups'.

Let's imagine a concrete case in order to illustrate how these groups function. Bixente Desobediente is an insumiso who will have to serve a sentence of 2 years, 4 months and 1 day. He needs to convene a meeting with people close to him (family, friends) plus someone from the movement. The first meeting is attended by his girlfriend, his sister, three friends from the neighbourhood, a university pal, a cousin, a guy he met at an anti-militarism discussion group and a neighbour. This group reviews his decision to be an insumiso, discussing his motives and the consequences it could bring. As not all of them understand concepts like civil disobedience, nonviolence, direct action, and antimilitarism, the group looks at these too. In the following meetings, they establish goals, and after much brainstorming and discussion, they come up with the following objectives:

Supporting Bixente emotionally is important during his time before his trial, in court itself and in prison. One suggestion is to hire a bus so that everybody who wants can go to court and witness the trial. Other suggestions are to visit Bixente in prison and encourage others to write letters. The idea is that he should not feel alone and has continual contact with supportive friends. This support should also extend to those close to him, such as his parents.

Both before his trial and in prison, Bixente will need material support. Before his trial, he goes into hiding to avoid arrest and pre-trial detention, so people need to bring his things from his previous place of residence to his current location so that he is not caught. In prison, he needs books and paper to continue his studies. This is also work of the support group.

The MOC, the movement to which Bixente belongs, is in charge of the political work. However, the support group can also collaborate with this work,joining in protest actions organised by MOC - especially those connected with his trial and imprisonment. At the same time, the groups can reach out politically in the places that Bixente is known - his neighborhood and university - to maximize the benefit provided by the disobedience of Bixente and other prisoners. Also the support group can put together an email list to keep people informed about his case and a webpage with information about Bixente's case, antimilitarism, war tax resistance to military spending, peace education, and links to related pages. Every now and then, Bixente will write a letter that can be circulated. The support group should coordinate with the MOC - for instance, one member attending MOC meetings - and check that their actions in line with the MOC's overall campaign.