15th of May - International Day of Conscientious Objection 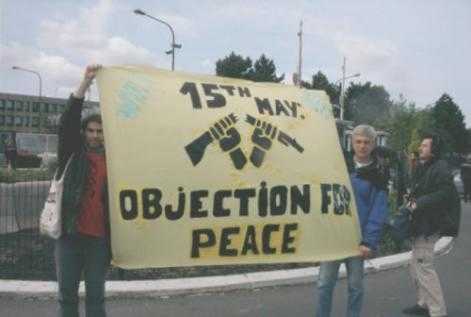 The first event of this kind took place in 2002 in Belgium. The planned action there was a blockade of the NATO headquarters on 15 May. While the object of the action had been decided in advance, the entire action was planned during the week-long meeting, with participants from Belgium, Britain, Germany, France, the Netherlands, Spain, Macedonia, Croatia, and Turkey. This led to quite a few challenges in terms of experience and languages. Besides training and preparing for the action, the participants also wrote a public declaration.

There were heated discussions on the aim for the action - how much to focus on the occupation, or on conscientious objection, or militarisation in Israel. In the end consensus was reached on a set of several main aims: to highlight International CO day and conscientious objection as an international campaign, to raise awareness about the role of the military in every day life in Israel, not to antagonise soldiers, and to do an action that might inspire other actions.

In 2004, the event took place in Chile - and the main language of the meeting was Spanish. Again, the format of the event was similar to the one used the year before - but the dynamics were quite different, with most of the participants coming from Latin America. The joint planning and training for the action proved to be an important part of the learning experience.

With Greece in 2005 the event moved back to Europe. Again, the training and the joint planning for an action were a major part of the event.

In 2006 the International Day on Conscientious Objection moved to the United States. Here, the focus was on sharing experience through a seminar, and less on an action. This was partly due to many actions taking place on the same day already, so that it didn't seem to be effective to add just another action to the day.

In Colombia in 2007, activities included an antimilitarist concert, an international meeting, mainly focused on the planning and discussion of international solidarity for Colombian COs, and an action on 15 May in the city of Medellin.

The events pose challenges on several levels. Here, I don't want to go into the major challenge of fundraising for these events, as this is beyond the scope of this book - although the finances have a huge impact on the event itself.

No one person would be able to do a proper evaluation of all these issues on his/her own. Instead, I want to present some reflections.

Due to the demise of the International Conscientious Objection Meeting (ICOM) in the late 1990s, War Resisters' International took over the coordination of the day in 2001. However, there was no existing CO network to decide on the focus for the next year - something which still is a problem. Initially, it then fell to the WRI office and the WRI Executive to make this decision. After 15 May in Israel, attempts have been made (unsuccessfully) to involve participants of past 15th of May events in the decision making process (through an e-list).

Next it was proposed, if possible, to involve the annual WRI Council meeting in the decision making process. However, due to the lack of representation of CO activists on the Council, this too has not been too successful. Now the decision rests with the committee of WRI's Right to Refuse to Kill programme.

Clearly, the decision making process is not satisfactory. It points to the lack of a truly international network of conscientious objection movements, not only within WRI, but also beyond.

The organisation of such an event has not always been easy. In 2002, most of the international organisation fell to the WRI office, with the Belgian host mainly providing the logistics. In the following years the hosts played a bigger role in the organisation of the event, including the programme.

One major problems has often been the different time scales. While such an event - including the fundraising for it - requires several months up to one year of preparation, local groups often work in terms of weeks, or just a few months.

A more fundamental problem is to integrate the international desire for an annual event on a particular date with the strategies of local campaigns, ensuring that the international action contributes to an ongoing build-up and is not just a one-off item of action tourism.

At the first international CO day event organised by WRI, there was little formal programme, and most of the time was spent on exchanging experience, and training and preparing for the action. In subsequent years a seminar was added to the programme, in response to the need expressed by the local host group to have a more "public side" of the event (besides the action).

There has always been a tension between three different aspects: sharing information and experience about each other's campaigns, a public seminar, and training/preparing for a joint action. With the move to a more fixed and public programme, including a seminar, it was often possible to present the experience of different countries in the public seminar. However, what other activists already know - and want to know on top of that - is often very different from what other seminar participants expect.

Training and preparing for an action takes a lot of time. While practically working together in the preparation of one action is a good experience, and a good exercise at group building, it leaves little time for other discussions. The question has been asked: is this the best use of the time spent together?

Also the action itself can lead to tensions. What are the expectations of the local hosts? What are the risks involved for local activists, and for international participants? What are the local sensitivities? It takes a lot of time, and listening to each other, to get an understanding of potential problems with a certain form of action, and to come to a consensus over the type of action. Looked at it from this perspective, a few days are not a lot of time, especially as the very practical preparation - banners, or other material needed for the action - also needs to happen during that time.

In general it has to be said that none of the actions - and none of the events - have been perfect. It has never been possible to resolve all the tension, but still - generally speaking - participants and organisers always had a positive feeling after the event.

Personally, I feel the training part has been important, and I think it has been a pity that it hasn't been on the agenda of the last two years. True, we often tried to do too much in too little time, but the training and planning an action together has been an important part of creating a better understanding of each others' political perspectives, and action cultures.

Still, the challenge remains to combine this with more time for a more thorough exchange of campaigning experience, if we want to learn from each other as CO activists and movements.