The challenge of protesting

By Roberta Bacic with thanks to Clem McCartney

People protest for many reasons but often it is because we are confronted with a situation to which we must respond and take a stand. The reality we face - be that our own or that of others - pushes us to act/react/challenge/change what we are experiencing and seeing. We forget to take into serious consideration the possible consequences of any such choice. Positive consequences are often empowering. Negative consequences can be disempowering. We need to think about them in advance to be prepared for the next steps but also so we are not surprised by them and suffer even more stress.

Consequences of taking a stand 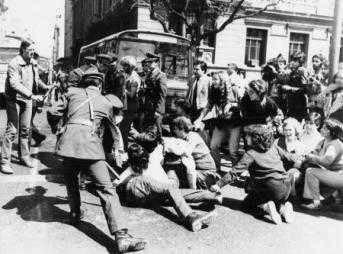 In taking a stand, we may be putting ourselves into situations that will push us to our limits and put ourselves at risk. If this happens, negative experiences will be almost inevitable and fear will most likely surface as a response. In situations of insecurity and anguish, those feelings will merge: fear of being arrested, fear of being denounced, fear of being tortured, fear of being caught in an illegal meeting, fear of being betrayed, fear of again not achieving our goal, etc. Fear of the unknown (what happens if I am arrested?) and also of the known, be that a specific threat by phone or being aware of what has happened to others. We need to know what can be done to avoid those consequences or cope with them when they arise.

Three main elements can help us to function: confidence and solidarity with our fellow protesters, good training and emotional preparation and debriefing. (resource list at end? More Description needed?) For more on go to http://wri-irg.org/nonviolence/nvse07-en.htm

Some of the consequences we need to be prepared for.

When we think of traumatic consequences we immediately think of the physical consequences. Being manhandled, arrested or beaten and our human rights violated. This is a greater risk in some societies than others, and people protesting in very militaristic and authoritarian states are particularly courageous. But all of us will normally feel at least some anxiety and fear and at least be aware of the risk of physical pain or discomfort. These fears may immobilise us. But it is not good to ignore them. If we are not prepared our natural reactions in the situation may actually lead to greater hurt. For example we may have an urge to run, but if we start running we lose our discipline and those opposing us may be tempted to attack at that moment. Being prepared, rationally, emotionally and practically, is therefore important and training in fear control is very helpful. The physical risk is well understood but other risks are not less real and receive more attention here. See Consequences of fear Exercise.

You can also look at a specific example on http://www.peaceworkmagazine.org/node/232.

2. The strength of coming out in public

We need to be aware that we are choosing to stand outside conventional opinion. It is not so difficult to share our feelings in private with those who share our views, although we may worry about being betrayed. Coming out in public is more difficult. We are taking a stand not only against the state but also against common social attitudes. The very reason that we need to protest is to challenge those conventions, but knowing that does not make it easy. We are exposing ourselves. We think of Women in Black in Israel who simply stood there as a silent witness to what they could not accept in their society. Now that form of witness has been used in Serbia, Colombia and elsewhere. Solidarity with our colleagues is very important in such situations, and to create space to air our feelings and deal with them. Even those who appear confident may have worries that they need to acknowledge and deal with. Use a Hassle line exercise to practice expressing our position.

3. Preparing ourselves to deal with distress

There are other risks and other consequences that are subtler but for that very reason can be more distressing. We may face disrespect and humiliation, be mocked and goaded by bystanders or the state forces. Again Women in Black come to mind, spat at and abused by a hostile public, yet remaining silent and not reacting. This can be emotionally distressing. Role playing the situation in advance at a training or meeting of the participants helps us to prepare ourselves emotionally and to understand more fully the motivations (and fear) of our opponents. Solidarity and confidence in our fellow protesters is again important and that is partly built up by such rehearsals. Less emotionally distressing, because it is less immediate, is bad publicity. The press, who may libel us with all kinds of inaccuracies, may challenge our good faith and motivations. Preparing ourselves for such humiliation makes it easier to cope with it when it comes.

4. Putting yourself in the position of the other

We may even seek out humiliation as part of the statement we are trying to make, as when protesters try to put themselves into the situation of people they are defending. Many groups have done street theatre playing the parts of prisoners and guards at Guantanamo Bay. Here unanticipated feelings rise to the surface, which participants sometimes find difficult to control. The “prisoners” may in fact begin to feel violated while the “guards” find themselves entering into the experience too enthusiastically or on the contrary feel a sense of revulsion. Either way the participants may feel defiled and polluted. To deal with such possibilities they need to be prepared for such reactions in themselves and be debriefed sensitively afterwards. Another example was the protests over factory farming when volunteers used their own bodies to model slabs of meat. The reaction may be to feel really enthusiastic and liberated by taking a stand or alternatively troubled at the situation they have put themselves into.

Sometimes we have few problems before and during the protest but it is a real blow if we seem to have had no impact. The huge protests against the war in Iraq on the 15 February 2003 did not stop the war. Our worst fears were realised. Not surprisingly, many people were disillusioned and disempowered. Naturally they asked “Was it worth doing it?” They may not want to take part in any other actions on this or other issues, feeling it worthless. What can be done to address this disillusionment? We need opportunities to reflect together on what has happened and what we can learn from the experience. See Evaluation section. We need to adjust our expectations. Protests are important to show our strength, but they alone will not stop a war.

6. Dealing with success in our actions

As well as worrying that a situation may turn out worse than we anticipated, paradoxically we might also find it hard to cope with what might on the surface seem positive - for instance, if the security forces act more humanely than we anticipated or the authorities engage with us and seem willing to consider our demands. This can have an unsettling effect if we have steeled ourselves for confrontation. What happens to all the adrenaline which has been built up in our bodies? What do these developments do to our analysis? Are we wrong in our analysis of the situation? Should we trust the system more? Or are we being duped by sweet words? Our movement may achieve more solidarity when we are faced with harsh opposition and may fracture when that does not materialise. Therefore we need to be ready to know what responses might be most effective and test out through Role playing what is possible and when it happens we need to be able to collectively assess the situation and act appropriately.

7.When the levels of aggression rises up

Many of us have been shocked at the aggression which arises during a nonviolent protest and not only from those opposed to the protest. We may find a wave of aggression rising up in ourselves when we are manhandled by authorities and even if we do not react that feeling can make us very uncomfortable and doubtful. Or other protesters may start to riot and we have to be able to find an appropriate response. Do we join in, leave or hold our ground continuing the protest nonviolently as planned? There is little time to think in such situations, so such possibilities need to have been thought through in advance and we need to have our alternatives clear so that quiet decisions can be made. Use Decision making, Role playing and De-escalation exercises.

We might be protesting in the North in states and cultures, which claim to be liberal, democratic. We might be in an authoritarian regime. But we should not assume that protest is easier in liberal democracies. Some such states can be very harsh in their treatment of protest. There are other factors that determine what is the potential of protest and its limits. The society may be closed or open. In a closed society the risks are greater because dissidents can disappear and there is little possibility of any accountability. It may have a functioning judicial system, independent of the government, which can act as a check on human rights abuses. The culture of the society is also a significant factor as it may value conformity and respect for authority. Or the society may feel weak and vulnerable to the pressures of modernity or of the influence of other states and therefore any form of protest is seen as disloyal and destructive.

While protest is more difficult in some situations than others, all the issues I have discussed here may arise in any context, albeit with varying intensity.

If we prepare for the mixture of emotions and reactions which may result from our protest, build solidarity with our colleagues and analyse and debrief ourselves on the consequences of our actions, then we are better placed to continue the struggle for a better society, even though we may know that that will not be achieved in our lifetime, if at all.

However if we do not prepare well and deal well with the consequences, then we may end up not helping anyone, not even ourselves. We may get discouraged and decide to give up or take up other types of strategies that may be counterproductive, such as mainstream politics and the use of force. Or we may get into a pattern of just protesting for its own sake, without any strategic sense. As such, we may appear superficially to be still engaged in the struggle and others may admire our persistence, but we have lost a purpose for all the energy we expend and our ineffectiveness and purposefulness may discourage others to engage. If - as I believe - we have a duty to protest, then we also have a duty to prepare ourselves well: to identify the risks to our physical and emotional well being, and take steps to ensure that we can overcome these risks and continue the struggle in a positive and effective manner, keeping true to our ideals. Last, but not least, let’s keep trying, have some fun while we do it and by that give peace a chance. We are not the first ones in doing it, nor will be the last ones. http://www.youtube.com/watch?v=I-NRriHlLUk