Israel - New Profile learns from the experience of others 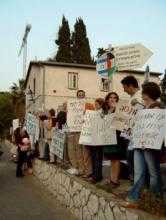 There was a new political awareness in Israel in the mid-nineties. Increasing numbers of people were objecting to Israeli's presence in Lebanon and the loss of Israeli lives. Some were questioning the government's infringement into Palestinian lands. Demonstrations were taking place daily, particularly at major intersections, to pressure Israel to get out of Lebanon. There were several groups who were leading the grassroots movements at the time– Four Mothers, Mothers and Women for Peace, and Women in Black.

Personally, my son had decided to refuse conscription into the military, and I needed to get more involved. I started to look for people who were examining things critically, hoping to find a support group. I had a neighbor who was a social activist and we started going to demonstrations at the intersection close to home. There I heard a woman address the crowd about getting even more involved. The next day I called her and she told me about a study group that had just started meeting on a monthly basis. The group was comprised of middle and upper middle class white (of European descent as opposed to Mizrachi, Ethiopian or Palestinian Israeli) women, most like myself, looking for some way to consider change together, some were already active in the peace movement, some had lost family members in war.

In the study group I learned how to look at things with a critical, feminist eye. Rela Mazali, a feminist, author and activist in the peace and human rights movements for many years, was the facilitator. She brought materials which we analyzed to understand why things are the way they are. Why is Israel a militarist power? Why is there so much discrimination in Israel? What are the similarities between the pyramid of power in the military and civilian life in Israel? What is victimization? What are the roles of the women and mothers? What is Jewish heritage and what role does it play in Israel today? (and many more relative issues)

We talked about effective movements that we could learn from. We looked at two different but related South African groups that worked to end apartheid. They are equally important examples of the power of small focus groups who work in a spiral motion and gain momentum.

We studied South Africa's End Conscription Campaign, which was “launched by various CO groups in 1983 to oppose conscription in the service of apartheid. In 1985, after white troops were deployed in black townships, the amount of conscripts not responding to the call ups increased by 500 per cent.” (from a short history at http://www.wri-irg.org/co/rtba/southafrica.htm). We discussed the End Conscription Campaign through Rela's study and research as an activist and writer, in her ongoing reading about militarization—first through Jacklyn Cock's book, Women & War in South Africa and then, continued with an email exchange with her and others.

We also studied the Black Sash Movement, a group of nonviolent white women who used the safety of their privilege to challenge the apartheid system. They displayed black sashes to express their disgust at the racist system. They tied them to trees, posts, on car antennas etc, anywhere they could be seen by all. We tried to use an orange sash similar to the black sash used in South Africa as a symbol, tying them to everyplace possible, but it never took off, it didn't work at the time. (The Black Sash Movement had been an inspiration for Women in Black, which was founded in Israel in 1987.)

But we did find another aspect of their work very helpful. While we had read about this, we also learned from So. African women, one white, one black and one of Indian descent, who, in 1999, facilitated a seminar bringing together Israeli women in the Left.

South Africans couldn't congregate in groups of more than three. So they met in groups of three, then one of them would meet with two more people. The South Africans worked in that circular movement, using this deeper way of networking to get the message out and engage in dialog about ending conscription. It's a matter of discussing with people, not lecturing. Even if you find someone who doesn't agree with you except for one thing, build on that one thing. One on one, or one with a very small group, is more effective. It takes a lot of energy to organize. Everyday life is hard, it takes a lot to be an activist. But putting the time into this kind of process can be deep and effective.

“For our first open study day in October 1998,” Rela recalls, “I wrote up the main principles formulated and followed by the End Conscription Campaign and gave a short talk also proposing possible similarities and differences as I saw them. We returned to these questions from time to time at various points in our meetings, discussions, organizing, etc.”

In retrospect, we realize this was our founding conference. We were not looking to form a movement. We really wanted to gather together and learn. The events of the day and the fact that over 150 people showed up to discuss and learn made it clear to us that there were people we could work with.

My son being a pacifist may have been a major factor in our group discussion when looking at the issue of conscription and the right to conscience. Some felt that conscientious objection was too radical and later left the group. But about 12 of the original 30 or so women who had been members of what had grown into two study groups are still active in New Profile today. In August of 2000, New Profile discussed initiating an End Conscription Campaign. However, the Intifada started a month later, sidetracking that idea. We are just getting back to that now with our new campaign “Thinking Before Enlistment”. New Profile recognizes conscription as one part of the militarization of Israel. Even if the Occupation ended, we still have to demilitarize Israeli society.

New Profile has maintained a learning/action balance. We have internal study days as well has open sessions. We have learning circles 5-7 times a year, usually on issues that we want to learn more about. Sometimes we focus on a very specific issue during our monthly plenary. This is usually without guest speakers and focuses on different aspects of what can become a basis for action. But for separate study days and learning circles we may have guest speakers. But sometimes the facilitator is someone from within the group who has learned about something in particular or is an expert in the matter. We want to know more and learn about it collectively. New Profile is non-hierarchical. We have remained an active organization, working without a managerial board for 10 years. Nothing is ever done singlehandedly or without analysis. Nothing changes overnight, to really make change happen, we need to be persistent. Our studying of effective movements made that clear.