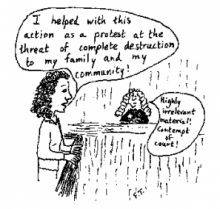 Legal systems are different in every country. However, for actions where it is likely that participants will be arrested, it is always useful to have a 'legal support team'. This advice on forming such a team in Britain is adapted from the first section of a much longer briefing by the Activist Legal Project at: http://www.activistslegalproject.org.uk

Legal support may be a background but it can be absolutely vital. You may be the last home after the action, often spending hours hanging around police stations waiting for activists to be released. You won't share the glamour or get photographed, but without legal support some actions aren't possible. Perhaps if you weren't there, half of those at the 'front-end' of the action wouldn't take part!

What are the Aims of Legal Support?

The number of people involved in the legal support group will depend upon the size of the action and the number of arrests expected. A number of essential roles have to be fulfilled:

Unlike legal observers, who do risk arrest by joining activist on the ground, the Legal Support Group should at no stage jeopardise their position with regard to arrest. You are no use to anyone on the inside of a police cell!