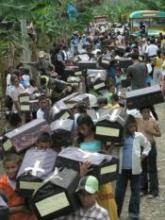 The peace community of San Jose de Apartado was founded in 1997 and was born in adverse conditions for nonviolent resistance. The Community is located in an area of Uraba, Colombia, where strong economic interests are at play and where armed conflict is waged between guerrillas (the FARC), state forces and (usually working in collusion with the state) paramilitaries. It is an area where political terror, assassination and intimidation has been used to eliminate leaders and activists. The Peace Community itself is formed of displaced people, people whose parents and grandparents were also victims of violence. Throughout its existence, the Peace Community has had to face campaigns to discredit it from the highest levels of national government and the media, especially under the government of Alvaro Uribe.

The Peace Community has more than 1,000 members, even though around 150 members have been killed - by state security forces, by paramilitaries or by the FARC.

2. Towards a strategy of civil resistance

What began with the urgent need to find practical alternatives for displaced people has grown into a project offering an alternative to the current model of society. This has three dimensions:

In a war zone, there is not the normal supply of essential goods. Therefore the Community needs to grow its own food, but cooperates with "fair trade" groups to market coca and baby bananas. In addition, it took the initiative to organise meetings and courses (under the title Peasant University or University of Resistance) to share information about ecological forms of agriculture.

The emergence of the Peace Community has been a radical challenge to those who seek to dominate a territory, above all the armed actors of the state, the paramilitaries and the guerrilla. To survive, the Community needs to build relationships that on the one hand reduce the pressure on the Peace Community, and on the other strengthen its resilience - relationships at the local, national and international level.

The founding declaration of the Peace Community lays out principles of demilitarisation and neutrality which represent the common denominator of the community. The act of signing this declaration is a unifying force for the collective.

Training has been vital to the community. First in preparing to establish it - when there were workshops with displaced people and prospective members. Now the Training Committee concentrates internally on strengthening the understanding of and commitment to the Community principles, analysing its situation, and evaluating the whole process of civil resistance. It teaches conflict resolution skills within the Community itself, and aims to strengthen the resolve of Community members not to join any armed group. The Training Committee works not only with families, coordinators and working groups of members of the Community, but also with other families in the area.

This refers to activities to reduce the risk of violation of human rights of Community members and the very process of civil resistance. This involves: - documentation and public denunciation of violations committed by all armed actors; - identification of community spaces by erecting billboards declaring its principles; - disseminating information through small publications, videos, national and international meetings on its territory, national and international tours and since late 2004 with the creation of its own website; - petitions to the national government and increasingly to international agencies, which sometimes have led to favourable verdicts, restrictions placed on US military aid, the trial of soldiers accused of killing Community leaders in February 2005; - protective accompaniment: Peace Brigades International regularly accompany transport to and from the Community, while other international groups, including the US Fellowship of Reconciliation, that provides protection through accompaniments in the community.

Unlike "safe areas" created by agreement between armed forces, in the Peace Community is the civilian population itself that has decided to create a physical space and social protection for those not involved in the war. The peace communities are not a mere space of survival amid the bullets, but seek to build peace with social justice, a way of life based on dignity, autonomy and solidarity.

The peace community of San Jose de Apartado has been one of the worst hit by political violence in Colombia. Political repression is aimed at breaking the principles and beliefs of those who opt for peace, at spreading mistrust and intimidation, and crippling hat contrast individual and collective levels established. Through selective actions and copies of direct violence, spreads intimidation and mistrust among the population, crippling people's capacity to react.

Persistence in this resistance despite the violence can be partly explained by the absence of better alternatives for people who have been forcibly displaced. However, it also depends on more positive factors: - a strong social consciousness, acting as a subject and not subordinate to political orders; - the perception that, despite the armed actors, the process of resistance has a chance of success; - confidence that nonviolence offers better chances of survival; - an unshakable commitment not to abandon the struggle for which so many martyrs have already given their lives.

The Peace Community resists at many levels: - resisting malaria, poverty and lack of basic services in such areas of Colombia; - resisting the terror of legal and illegal armed groups; - resisting the temptation of revenge, in a territory where it would be extremely easy to join any armed actor and seek vengeance against an enemy; - resisting the imposition of an exclusive and authoritarian model of society, while proposing a project of life based on a comprehensive vision of dignity and development.

Among the most important factors that have enabled peasants and farmers of San Jose de Apartado to maintain nonviolent resistance during the past 10 years, are: