By Jørgen Johansen and Brian Martin

What makes a protest action effective? Organisers have lots of potential choices: what, when, where, how and who. Looking at how audiences are likely to respond to messages can give guidance.

Heads of government are coming to town. Let’s organise a protest! We’ll have a massive rally and march. Those who want to can blockade the venue. We’ll make our concerns about inequality, exploitation and aggression known far and wide.

But wait a second. Is this sort of protest going to be effective? Is it going to change people’s viewpoints, mobilise support and help bring about a better society? Or, instead, will it enforce prejudices, alienate potential supporters and suck energy away from more effective initiatives? And anyway what does it mean to “be effective”?

There are no simple answers to these questions. Actions have many different impacts. Many are hard to measure and some are entirely overlooked. Weighing up the pros and cons is difficult: it’s an emotional as well as a rational matter. 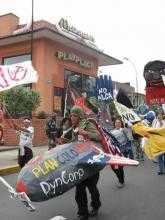 Actions need to be designed with the context in mind. What is appropriate in one situation could be completely counterproductive in another. Laws, media, police, culture, religion, civil society and many other factors are very different in Burkina Faso, Germany, Nepal, Indonesia, and China.

In India in 1930, Gandhi chose to build a campaign around salt, a potent symbol for Indians because of the British salt laws. What could protesters use as a potent symbol in Swaziland or Sweden today?

Actions must be designed with a deep knowledge of the local conditions. As a general rule, success stories should never be copied, but they can function as inspirations and as useful cases from which to learn.

Open-ended hunger strikes are regarded very differently in a Christian culture than in a Hindu society. For atheists and Christians it means a lot to sacrifice your life, whereas a Hindi anticipates thousands more lives to come — an important difference!

In a country where an activist risks torture, lengthy imprisonment or the death penalty, civil disobedience is a different matter than where the likely outcome is a fine or a few weeks in a decent prison. It is wise for activists to act differently in countries with strict censorship and state-run media than where free and oppositional media regularly cover demonstrations.

There are two main types of actions: (1) oppose and (2) promote. The first focuses on what you disagree with and the other on your alternative. Within each of these there are many options. In most cases, it’s much easier to create a positive image when you have an alternative. To say no! is common and easy, but it will often be regarded as unhelpful, as blocking progress. To present alternatives is more demanding but often rewarded by being seen as constructive.

Within each of these main categories there is again a choice to be made: direct action or indirect action. By direct action we mean to do something about the problem/conflict ourselves. It could be to close a city street to change it into a space for pedestrians. Or it could be to squat in a house and turn it into a cultural centre. When the activists in Genetix Snowball destroy genetically modified plants from fields in Britain they are not only demanding that these fields should be made illegal but are removing them themselves.These types of actions are often illegal and risky. The point here is that the activists themselves are making the change directly: they are taking direct action.

Indirect actions involve asking someone else, such as politicians or business executives, to respond to a demand or deal with an unjust situation. In many countries you need permission from the local police to have a demonstration and sometimes they will be helpful in keeping calm during the demo. These types of actions are dependent on sympathy from someone else in order to be successful. If neither power holders nor the public support your demands you will not achieve what you want.

Note that in a dictatorship, making requests can be a form of direct action, because it is an exercise of free speech.

For both direct and indirect actions there is a need to develop more types of actions. Creativity, fantasy and experiments are crucial. Just as arms producers come up with more sophisticated weapons every year, activists need to develop new forms of action. Good examples should be tested, documented and adapted for use at other times, places and circumstances.

On many issues there are three main groups: activists, opponents and third parties. When a group wants to challenge a repressive government, the activists are those involved in protests. The opponents are the government and its agencies such as the police and the army. The third parties are those not directly involved in the struggle: the general public and most people in other countries. People can move from being a third party to being an activist, and the other way around, as a consequence of actions. One goal is to engage more people. In most cases the media are carriers of information/propaganda and messages from the event to wider audiences.

As well as looking at who the audiences are, it’s helpful to look at the interaction between activist methods and audiences.

Media guru Marshall McLuhan said “The medium is the message.” For example, television encourages a certain way of viewing the world, irrespective of what’s on the screen. Personal conversation encourages a different perspective.

In activism, too, the medium — namely the method of action — is the message. According to a perspective in psychology called correspondent inference theory, audiences make assumptions about someone’s motivations according to the consequences of the actions they take.When activists threaten or use violence — for example, bombings, assassinations or hijackings — many observers believe the goal of the activists is to destroy society. The method, namely destruction, is assumed to reflect the goal. For example, after 9/11, many people in the US thought al Qaeda’s goal was to destroy US society. This was the wrong message. Very few US citizens knew that Osama bin Laden’s key goals concerned US government policies in the Muslim world.

The same thing applies on a much smaller scale. If a worker on a picket spits on a manager, the message is one of contempt and disrespect, which can distract audiences from the message that the pay is too low or working conditions are unsafe.

Actions are more powerful when the method used — the medium — is aligned with the message. In the US civil rights movement, well-dressed blacks entered white-only restaurants and sat politely and quietly at lunch counters, not responding to abuse and police provocation. Their presence and respectful demeanour sent a powerful message that was aligned with the short-term goal, equal access to the restaurant, as well as the long-term goal of racial equality. On the other hand, the abuse by white patrons and aggressive action by police, directed only at blacks in the restaurant, sent the message that segregation was a system of racism, exclusion and aggression. These powerful messages helped discredit segregation among audiences in the rest of the US and the world.

Protesters often come under attack: they may be slandered, harassed, beaten, arrested, imprisoned, even killed. Their communications may be intercepted, their offices raided and their equipment confiscated or destroyed. These attacks are hurtful and expensive, damaging to morale and can discourage participation. But with the right preparation and tactics, and good luck, some attacks can be made to backfire on the attackers.It’s not easy and doesn’t happen often but it can be very powerful.

Perpetrators and their supporters regularly use five methods to inhibit outrage from their attacks:

For example, after police assault protesters, the police and their supporters may use every one of these five methods.

Each of the five methods can be challenged.

In deciding on what, when and how to protest, it’s useful to think of audiences and messages.

Actions need to be designed with the context in mind. What is appropriate in one situation could be completely counter-productive in another.

There are two main types of actions: (1) oppose and (2) promote. The first focuses on what you disagree with and the other on your alternative.

How do activist methods align with activist goals? If there is close alignment, it’s more likely the right message will be received.

How will an attack be perceived? It’s vital to be prepared to counter the methods of cover-up, devaluation, reinterpretation, official channels, intimidation and bribery.

For actions to become more effective, activists need to learn from past experiences. They need to document and evaluate what they are doing and make this information available for others. Just as students at war colleges learn about historical battles from lectures and textbooks, activists must build a similar system for coming generations to learn from the history of social movements. This requires serious, critical evaluations of planning, actions and outcomes. It is just as important to study mistakes as to celebrate victories. Then these evaluations must be made available for other activists, taking into account different languages and contexts. It is a large task. There are many actions from which to learn!