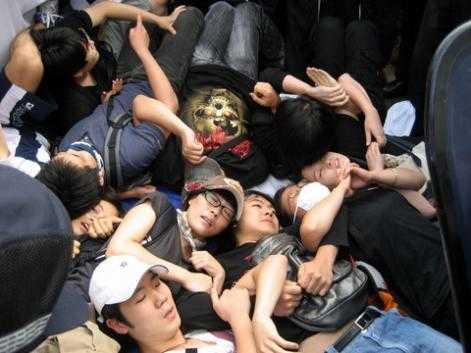 Not long ago the concept ‘nonviolent way of struggle’ began to be used in Korean social movements. Still, many social activists see nonviolence negatively, as a weak, passive, non-resistant form of struggle, partly because of our own history.

For more than 30 years after the Japanese colonial occupation and then the Korean War, South Korea was ruled by an authoritarian military regime. The regime responded to growing aspirations for liberty and democracy with armed terror, and so some people armed themselves, speaking of 'resistant violence'. Nowadays, the state still uses violence, especially against activists, but more activists are coming to accept that there is a nonviolent way of struggle.

There has been some form of nonviolent resistance since the 1980s, such as students objecting to being sent to the frontier facing the north, and there were statements by soldiers denouncing the violence they experienced during military service while civilians protested against questioning by police patrols. However, the concept of nonviolence was limited just to a means of resistance.

Now conscientious objectors to compulsory military service are said to be the first sincere pacifists in Korea who take nonviolence as a philosophy of life. They have advocated the right to refuse unreasonable orders from the state, where nationalism and militarism are prevalent, and they have appealed to the basic good in people, asking them to question fundamentally the military, arms and war. People were deeply moved when they saw conscientious objectors willingly go into prison for 18 months rather than take arms. They have come to know the significance of the act of conscientious objection, watching the continual wars caused by the USA and Israel.

The working group for conscientious objection in Korea is now focusing on giving necessary assistance such as legal and psychological counselling to those who prepare to object and also spreading awareness of the meaning of conscientious objection through a variety of activities, such as press conferences, forums, campaigns and direct actions. The number of conscientious objectors in Korea is still small and the demands on those who make a CO declaration mean that they need support. The CO movement does not have a unified attitude on nonviolent action. For instance, in 2003 when Kang Chul-min declared his conscientious objection, while he was doing his military service, there were a conflict of opinions whether to hold a sit-down demonstration in solidarity, and similar discussions arose concerning university students who made declarations of CO before they were called up. Many do not see that CO itself as one form of nonviolent direct action in someone's life that should connect with other forms of direct action.

Other groups that take nonviolent pacifism as a principled philosophy of their struggle played an important part in the struggle against the US base extension in Pyeongtaek. They used diverse tactics, including imaginative forms of nonviolent direct action that are in striking contrast to the previous ways of struggle. Some campaigners decided to make a 'peace village', squatting in buildings that were abandoned to make way for the base and renovating them as a library, cafe, guesthouse, displaying many works of art donated by artists supporting the campaign. When the bulldozers, backed by armed riot police and private security forces (= 'hired thugs'), arrived to demolish the remaining buildings in the village, villagers and supporters initially succeeded in blocking this, climbing onto roofs or tying themselves to buildings and sitting down in front of bulldozers. However as government force escalated - from a force of 4,000 men in March 2006 eventually reaching 22,000 in September - hundreds of villagers and supporters were arrested or injured as the demolitions went ahead. Despite this people still tried to farm the fields under military occupation, finally giving up in February 2007. The last candlelight vigil of protest was held in March 2007, and the next month villagers and supporters returned to bury a time capsule containing messages and marked by a flag saying 'Return'.