By Hilal Demir and Ferda Ülker

"nonviolence cannot be described as merely the absence of violence" 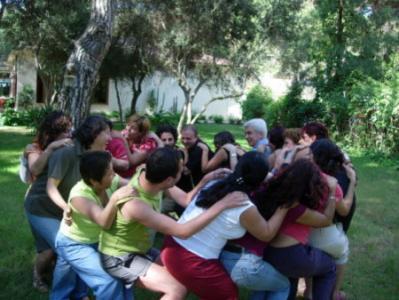 Militarism and patriarchy is deeply rooted in Turkish culture. Currently, war in the 'south-east' is based on ethnic discrimination against Kurds although it is officially described as a 'war against terrorism'. Any attempt to question militarism is called 'treason'. The people most affected by the negative consequences of violence are primarily women, children and elders, and also the religious, ethnic and political minorities. Violence is so internalized in Turkish society that alternative perspectives have been made 'unthinkable' - even among those who normally question hierarchy and promote freedom and equality.

The influence of the military can be seen in the following examples:

The army under Mustafa Kemal established the Turkish republic in 1923, after the collapse of the Ottoman Empire, and Kemalist principles remain fundamental to the state, reflected in the criminal code, the maintenance of a powerful army, and the belief in the 'indivisibility of the nation'. These generate a repressive attitudes. Few people see male domination of women as an issue, and physical violence is widely accepted against subordinates, prisoners and within the family.

The term 'nonviolence' was used for the first time in the principles of the Izmir War Resisters' Association (IWRA) in 1992. Within the association, nonviolence was always a discussion point - especially how to find practical ways of living nonviolently in a violent culture. We first used nonviolence training to prepare ourselves for prison visit scenarios when a group member, Osman Murat Ülke, was imprisoned for conscientious objection. Initially nobody from outside approached us to discuss nonviolence. However, now there is more interest - although the War Resisters' Association itself closed in 2001 because of the burn-out of members.

IWRA's commitment to nonviolence put us in sharp contrast with other leftist groups, who did not take our approach seriously and regarded nonviolence as weak and ineffective. We mainly involved antimilitarist, anarchist and feminist activitists. Perhaps the biggest welcome for nonviolence came from the Lesbian Gay Bi- and Trans-sexual (LGBT) movement which was just in the process of becoming structured and so took up nonviolent methods.

As far as political alliances go, the most fruitful interaction was with the women's movement. When we first began we formed a feminist and antimilitarist women's group called “Antimilitarist Feminists". trying to reach out to women's groups. Despite some initial disappointment, we reached many independent women and then began to hold trainings with women's organizations. This change in attitude was related to changes/transformation within the women's movement - in particular a desire to do things their own way rather than on traditional leftist lines. Questioning violence became a priority for women and nonviolence seemed to offer a response. As more women sought personal empowerment, our cooperation with women and women's groups strengthened.

The closest political group was the Conscientous Objection (CO) movement because it was built by the efforts of activists working to promote nonviolence. Although this partnership still continues, there is an individualistic streak in the CO movement that, I believe, makes discussion of nonviolence less effective. Although most Turkish COs are total objectors (that is, rejecting both military service and any civilian substitute), the movement's attitude towards nonviolence is equivocal at times - especially because of support for CO from the Kurdish movement and leftist groups.

The Izmir Nonviolent Trainers Initiatives (INTI) first formed as part of the IWRA with the additional support of some other people. Also our work was supported and improved in quality thanks to cooperation with German trainers - including training courses at Kurve Wustrow, an international training for trainers organised in Foca, Turkey, in April 1996, and the accompaniment of two German trainers who lived in Izmir from 1998 until 2001.

When IWRA closed in December 2001, the trainers' initiative continued, organising workshops in Izmir and anywhere in the country where we are invited - including in Diyarbakir in the south-east 'crisis' region. Today there are five trainers – four female and one male – who mostly work on a voluntary basis, only receiving travel expenses, although sometimes we have the money to pay a part-time coordinator. In June 2006 we began a course of training for trainers with 20 participants from all over the country.

The aim of INTI is to enhance and establish nonviolent principles and structures as an alternative to militarism, nationalism, hierarchy and patriarchy. Our public activities began with organising demonstrations and seminars on nonviolence and conscientious objection, also publishing pamphlets and looking for international cooperation. Police confiscated a number of our works at the press. In the field of trainings the group worked with activists from extra-parliamentary groups, from human rights, women's and lgbt groups and from parties. Additionally, the group cooperated with the Human Rights Centre of the Izmir Lawyers’ Association to train lawyers and policemen about human rights issues. In general, issues covered in our trainings include: creating non-hierarchical structures for grassroots and oppositional political work, consensus decision-making, discussion of militaristic structures within the society (starting from the family) and nonviolent alternatives. The individual behaviours and actions of the participants are always the basic and central point of our workshops. For our work, we reflected on theoretical analyses and practical experiences of nonviolence and nonviolent actions (starting with Thoreau and Gandhi and leading to today’s examples). We included reflections on anarchistic approaches to nonviolence, on Augusto Boal’s Theater of the Oppressed and Gene Sharp’s strategies of nonviolence.

Our group believes that it is possible to eliminate all kinds of inequalities, discrimination and thus violence and to develop nonviolent actions and methods for social and political change. Therefore, with the principle “Nonviolence is not an aspiration to be achieved in the future, but the very means to achieve such a goal” our group starts questioning everyday life practices that may seem to be “neutral”. For over ten years our group has been learning, practising and teaching the means and methods of nonviolence, an attitude towards life that we are now developing as a life principle. First, we offer "introductory" one day trainings for diverse organisations and for individual activists who question violence within their agenda. Second, we offer “issue-based trainings” on particular topics requested by groups based on their needs - these have included prejudice, conflict resolution, communication, sexism, and so on. Third, we offer a one-week intensive “training for trainers” session with selected individuals who have taken part in the first two training sessions and who want to develop themselves into trainers. Since 2002, we conducted the first and second parts of trainings with diverse groups1 working with women, LGBT, and human rights, ecology, peace and antimilitarism in Izmir, Ankara, Antalya, Adana and Diyarbakır. The individuals who participated in the trainings and want to be trainers were people who had already started questioning violence and had been trying to integrate nonviolence methods within their institutions and their individual practices. However, these people mentioned their lack of information and experience about “nonviolent action” for example in Diyarbakır it was identify the need to learn on developing nonviolent solutions primarily for their fundamental activities (like honor killings, violence against women, etc). They need empowerment in their work and enhanced capacity on nonviolence in order to create new solutions to the on-going problems. Having received an constantly increasing demand for a “train the trainers” training module, we have agreed that the third phase of the nonviolence trainings would be useful to a great degree. We are aware that it is impossible to cover all principles of non-violence in a one-week training. One of the solutions we found to this problem is to continue dialogue and seek possibilities for future meetings of supervision and feedback. Furthermore during the training, a network between the trainers all over Turkey will be formed and the operational principles of such a network will be established. This network of trainers approach would ensure the sustainability of our dialogue, continuing sharing of knowledge and experience among the practitioners of nonviolence trainers, and our collaborative dissemination of non-violence training both at local and national levels.

improving and strengthening the culture of democracy and human rights by introducing the concept of non-violence. questioning the culture of violence (which has a militaristic and patriarchal character in Turkey) in order to saw seeds of the culture of non-violence raising awareness of and struggle with discrimination, in all walks of life. Training trainers in order for them to work for these ends by gaining practical experience and increasing their capacity of training such that they can facilitate their own training groups during the one year period.

Looking at examples of nonviolent campaigns in Turkey, we can say that these activities have not been organized in an entirely nonviolent way. While nonviolence was one of the fundamental principles, we must state that these organizations lacked some of the qualities of a truly nonviolent action, such as preparing for the event with prior nonviolence trainings. One of the longest winded campaigns in this regard was the Militourism Festival. This festival, held annually on May 15th (International Conscientous Objectors' Day), consisted of visiting prominent militarist symbols in various cities, organization of alternative events and declarations of conscientious objections Another was the “We Are Facing It” Campaign. This campaign aimed at facing and coming to terms with the war that has been going on in Turkey; it was spread over the length of an entire year with major actions held every once in 3 months. The aim was to prevent people from ignoring this war with the use of nonviolent means such as street theatre.Another nonviolent action was the “Rice Day.” This action was held in Ankara, the locus of official administration, and specifically in front of a military barracks. We gathered there in order to say “we exist, we are here.” As antimilitarists who subverted societal roles in our activities, we used the symbol of the Rice Day in order to enhance group solidarity and end our indivisibility. Apart from these major activities, smaller organizations and actions were also mobilized for short-term political intervention purposes.

Although we have often been marginalized throughout the short history of nonviolence in Turkey and not as effective as we would like, we are becoming more visible thanks to the alliances forged with the women's and LGBT movements here. This is further aided by the fact that conscientious objection began being discussed in the public arena. Increasing demands from different political groups for implementing nonviolence training and methods in their programmes affirm this trend.