Gangjeong village: how a community resisted a naval base

Could you start by describing the island of Jeju? The culture, the people, the environment, the history…

When I was a high school student, many years ago, I travelled to Jeju for a school trip. Jeju Island has such beautiful nature. The weather is very different to the mainland, it’s more subtropical. They grow lots of tangerines on the island – the culture and the weather, and even to me as a Korean it's very different and unique. The village of Gangjeong is a tangerine farming village, and some people do fishing and diving.

I moved to Jeju Island almost five years ago, because of my involvement in the anti-base movement, and when I was there I learned more about Jeju Island, especially it's history. It is a very shocking and sad history, but I didn't know it, we didn’t learn about it in school. Jeju Island has been marginalised and oppressed by the central government. The islanders have a sense of their own sovereignty and independence. The people are very caring and community centred, with a very different culture.

In 1948, there was a massacre on Jeju Island, called the “April 3rd incident”. It went on for almost eight years. The massacre was initiated by the South Korean government and the US military government. I never heard about this in the mainland – we were really really blocked, we didn't hear about it in the mainstream.

How did the campaign to resist the base begin? Who was involved, and how was the campaign structured or organised?

The construction started in 2007. People don't like the base. In the South of Jeju, along the coast, there are many villages. Already two or three villages had opposed the construction of the base near their village, and successfully resisted. So by the time it got to Gangjeong village the villagers already knew about it and what was going on – but they found out about it on the TV! The population of the village is 1900 people, but there was a secret meeting of just 87 people with the mayor, who agreed to accept the base.

At the beginning of the struggle it was mainly the villagers resisting. They marched circling the island, so that they can share their opposition with the other islanders. A few leaders appeared, they were Jeju natives who had moved to the mainland. The chief of the village had a very strong voice, and was very persistent, and a few others – some of them were kind of “intellectual” and realised Jeju Island will be in danger. They wanted to protect their home town. That was how the movement got bigger, and this issue got more attention. The villagers were very very determined and angry.

To continue their resistance they stopped working – they were so determined to stop the base. Every night they gathered together and had a candle lit vigil in the centre of the village. 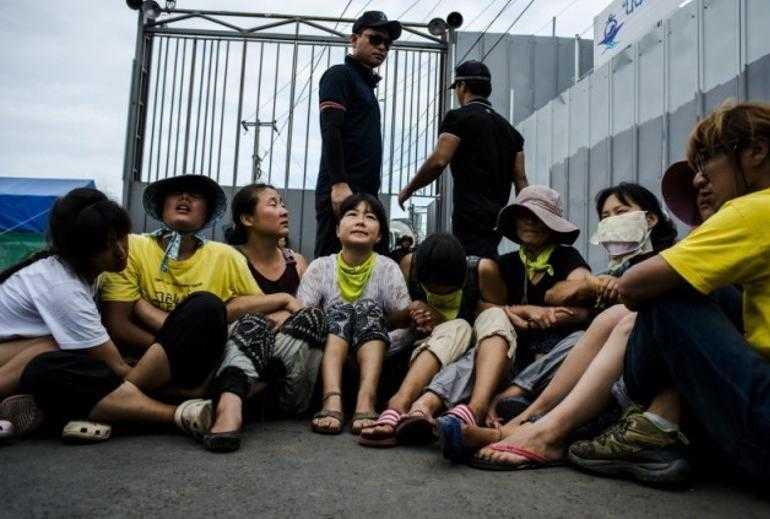 This village – it's really ridiculous – among the other options for the base that were nominated, but this village had the most beautiful nature. There was a rock called the Gureombi rock, that was formed by lava. It is really unique. It is 1.2km wide – it is huge, but it's one rock. Just off the rock there is also softer coral, designated by UNESCO as a special conservation area. So it's a very beautiful place. There are tracks or paths, so travellers can walk along the coast of the whole island. The rock is the spot visitors to Jeju liked the most. The construction site matches where the Gureombi is. 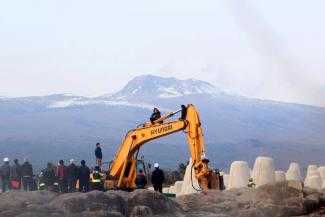 This issue spread out to the whole country, and more people came to visit and see, and some people started living on the rock, in tents, to protect it. There was also spring water, it was a really beautiful place. Some activists who moved to Jeju never got to see the rock, but I did.

The government pushed ahead with the plan, and then the construction finally started. Then the villagers and people from the mainland, and activists, and islanders, they all came and tried to stop the construction with their bodies, which led to a broader crackdown from the police.

The blockades happened every day, 24 hours a day. I came here in 2014, and I had been before. When I came here it was different, so I didn't see that kind of direct action protest, but my friends couldn't sleep because any time the siren started to say trucks were coming, and then people would go to the construction site to blockade the base.

The campaign has become well known international for it’s sustained, creative, nonviolent direct action – could you describe some of the actions that have taken place, and what the impact has been?

Some people were kayaking in the ocean, and caissons [huge concrete blocks placed in the water as part of the base construction] were being built in the neighbouring towns, and people went there to try and disrupt the construction. The caissons were put in the sea to extend the land, so people kayaked and tried to climb up them, and hung banners that read “no naval base”.

People who joined the protests were just ordinary citizens, and they were doing lots of music, films, and art was created at the time. So in the village there were lots of murals and art work.

Every day they go to the base, and they do the 100 morning bows at 11am. The catholic group celebrate mass every day. At noon, we gather together at the base and we sing and dance together. The numbers aren't as big as before now the base is built, but some people still go every day. Some people have faith, some don't, but they are so determined and still go.

There is still a tension between us and the navy. They hire security guards and they continue to bother us. My friends were in prison because they got fined, so many of us have experienced being in prison, and their experience in prison was quite traumatic.

Did the community use other methods – like political lobbying – to try and stop the construction as well?

In the history of Korea, this struggle was the most well known around the world. But ultimately it's also such a “local issue”, so people on the mainland didn't know what was happening. So there was no really big chance to stop the base in that way. Because Jeju was so far away, and it was such an ideological thing – people and activists here were described as “pro North Korea”. If I'm a conscientious objector in South Korea then I'm labelled communist and pro-North Korea, and the same with the base, because it's a “national security” issue. We were very marginalised politically, and still are.

There were some politicians who supported us, individually, but the parties didn't speak up. So there was no mainstream political support.

Also when the construction was going on, people collapsed because there was a presidential election and the conservative party won, so people didn't have hope any more, but the actions didn't stop. But it was a really negative impact.

The Catholic bishop of Jeju Island was a really big supporter of the campaign, and that's how Catholic people on Jeju Island also supported the anti-base movement. The thing is, the bishop was sent to Jeju Island because he was radical and progressive! So he didn't have a voice beyond the island. The protestant church groups were also supportive. 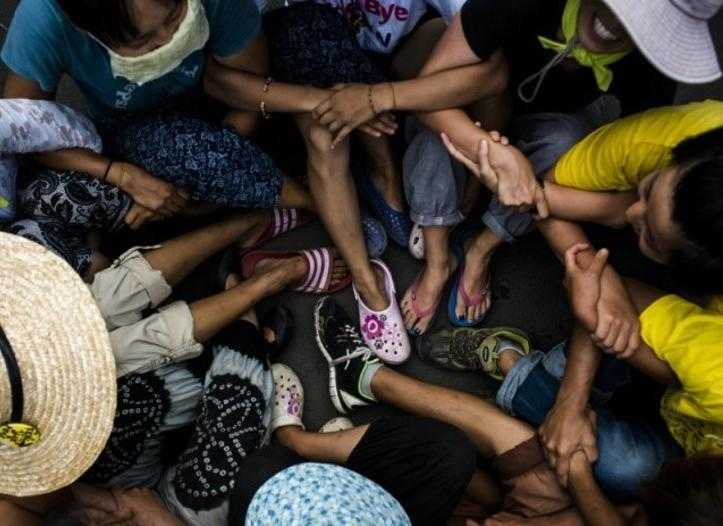 What has the response to the campaign been internationally?

I used to work with the international team here. A lot of international peace activists came and joined the struggle, and were really inspired by our action. International solidarity by people visiting the village gave us strength, and I think it was important to have the support from outside. The interactions with the international activists - especially for Jeju Islanders and the villagers - was a really good way of educating people – they know what's going on in the world and the US involvement in war.

The South Korean government is very friendly with the USA, and Korean people are too. It's hard to be “independent”. Some people don't want to admit this, but the information and knowledge is more exposed to ordinary people. It's important we have a chance to hear about that, so people come to think about the relationship. Gangjeong Village has been called the second April 3rd Massacre, because there are so many similarities, of the US violently imposing itself on the people of Jeju.

What has been the impact of the campaign and the base on the local community and on the environment?

This year the village leadership changed and they are more pro-base.

There are only a really small number of people, but my friends here don't think of themselves as “activists”, but they live a life of activism – they just live here, and they protest, in their ways. They have been here 6, 7, 8 years. Two thirds of the native population are not protesting anymore In October there will be an international fleet review – they will come to the island and have a parade. So then the government, they are now meant to be progressive, but on this kind of issue they are the same. This March there was a village meeting and a vote, and we opposed the fleet debut in the vote, so we were very happy. But then last month in July, the officers came down and met the village leadership. There was voting again and the vote was passed. So since then the village relationship is more adversarial, and more people have changed their mind and moving towards being “pro-base”, or maybe we have just suffered for many years and just believing now is the time to take some benefit. But the struggle continues, some native people are still very very persistent, but our voice is getting smaller.

It's not easy because we don't get as much support as before. Still Gangjeong is still a place where activists or people struggling with their vocation in South Korea want to come and see our resistance, and they are inspired. So I think this village is still such a learning place for activists and activism, so our spirit is still alive and strong. I don't know when it will stop, but I really admire my friends here. They just used to be ordinary citizens, but they wanted to be here to stand with the ordinary people. Now they are resisters, they are so determined.