Author
Andrew Metheven, based on interviews with Benson Khamasi and Bernard Agona

The Tuinuane Kenya Community-Based Organisation is a grassroots network in Kakamega county in the western corner of Kenya. Tuinuane formed in 2014, and has grown rapidly across the region. “Tuinuane” means “let us lift each other”. The network’s members build community and inter-reliance by supporting one another to cover the costs of funerals, education, and healthcare. They also share resources, support vulnerable members of the community with house construction and other forms of direct support. Most of the residents of Kakamega are from the Luhya tribe, with some from other minority groups, and most of Tuinuane’s members live in rural areas.

The initial organisers of Tuinuane were members of an organisation called the Muranda Aids Care and Education Program (MACPE) – an advocacy program with significant influence on health issues in the local area. In 2014, twenty members of MACPE received training from Turning the Tide Kenya, a Quaker-run program delivering nonviolence training to civil society organisations in Kenya. As part of the training, the participants recognised that meeting the costs of funerals for their family members was placing a burden on many families in the region, regardless of their clan or tribe – this was a particular concern because of a history of conflict between different clans in the area. In some cases, families sold land and possessions to meet funeral costs, causing particular stress for poorer members of the community. This issue was identified as an opportunity to build community solidarity by responding to the problem with concrete action in a way that spanned ethnic and tribal community lines. They set about recruiting more members; when the organisation had attracted around 100 members they decided to open a support fund to help members meet funeral costs, using a methodology called table banking (see below). When a family suffered a bereavement, everyone who was able to contributed a little to ensure that the bereaved family didn't face economic hardship. The fund ensured that any member who suffered a bereavement was assisted by all the other members.

These acts of concrete solidarity at times of bereavement, coupled with the focus on working across ethnic and clan lines, meant that the organisation grew rapidly to 1,000 members – and has continued to grow. By mid-2018, Tuinunane had over 50,000 members across the region. By becoming a member of the organisation and paying a small subscription fee (20 Kenyan shillings, roughly US$0.20 a week) members are also able to draw on community funds that can be used to meet the costs of education for children, healthcare, and support for orphans and widows and other vulnerable members of the community. Members of Tuinuane are also able to apply for small loans to support their businesses.

From the initial focus on supporting members with funeral costs, the organisation has broadened it's scope. It now looks to reduce violence in communities and to meet the needs of vulnerable people, including orphans, bereaved families, and the elderly by offering shelter, meeting health care or education costs, or building homes; members of Tuinuane have built over 300 houses for vulnerable members of their communities. The organisation has also organised football tournaments between young people from different clans, as a way of bridging divides in the community. 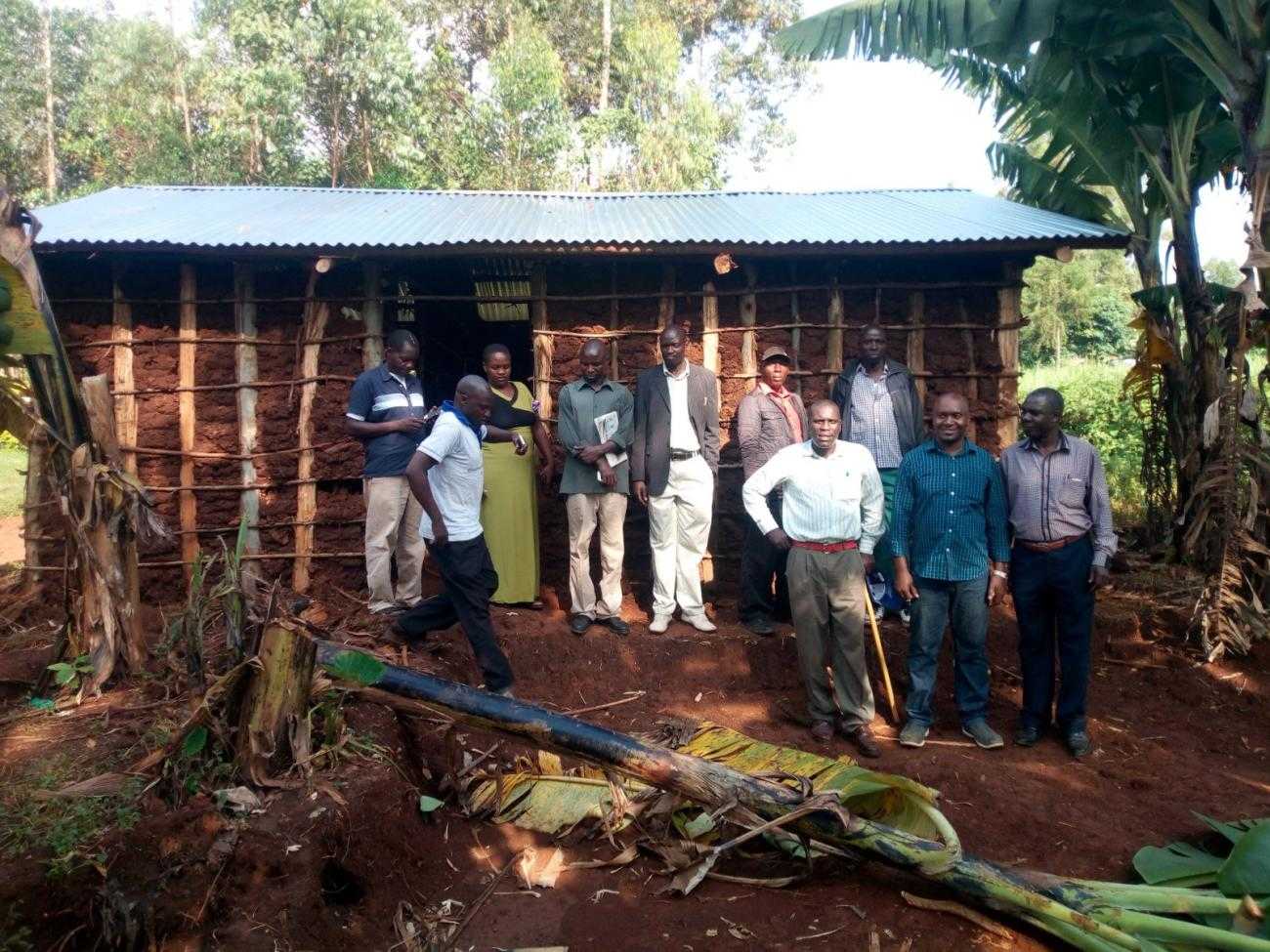 Tuinuane is organised into a series of subgroups – each group has 30 members. Five subgroups come together to form a regional zone. The organisation now has over 1,700 subgroups and over 340 regional groups, spread across a wide geographical area. Each subgroup nominates nine leaders, who are responsible for keeping records of the contributions members have made, the loans they have taken out, ensuring loans are repaid, and supporting those unable to make their repayments. Leaders serve their local group for two years. The organisation has both male and female leadership, and leaders are chosen by members. The organisation is entirely self-funded, and has never received any form of external funding. There are now over 24 coordination offices.

The rapid growth of the organisation drew the attention of local politicians. By strengthening the local community socially and economically, Tuinuane has been “shouting out” and becoming the “hand of help” for people in need, and in doing so was able to demonstrate that local people were able to provide for themselves and meet their own basic needs. In turn, this meant that they were challenging the authority of local politicians. They started gathering information on what politicians were doing, and have begun to push issues within mainstream politics, such as how resources and opportunities are distributed to different communities. Tuinuane have also demanded social audits of community projects, which involved trained community members to independently check the finances of community projects run by the government, to verify money was spent as it should have been.

The next round of elections will take place in 2022, and the Tuinuane organisers hope to be able to field local candidates committed to nonviolent social change.

Table banking is a system that enables members of a community to access unsecured loans, from money pooled by other members of the community, and allows community members to invest in each others businesses and enterprises. Table banking means that people typically unable to access credit – poor people who lack assets as collateral, rural communities, and women – can obtain small loans without going through a more established micro-finance organisation. Typically, members gather for a meeting and place their financial contributions – money they are able to spare - on the table. Members can apply for short- or longterm loans at low interest rates. The system is built on – and promotes - mutual trust, openness and honesty; participants share experiences and skills. Interest earned on the loans is fed back into the groups funds. There are an array of different approaches and systems in use in Kenya, promoted by different NGOs and community organisations, with different rules and structures, but the principle – of community members supporting each other with micro loans – is the same, and growing across Kenya.

Most of the loans distributed by local Tuinuane groups have been used to support small scale agribusiness projects, such as buying or renting land for farming, buying equipment or seeds, or purchasing animals. Tuinuane is able to show that after receiving a loan, families have better shelter, clothing, health, and are more likely to take advantage of family planning. Some families have been able to cover the costs of school fees; some children are now completing courses. The loans system has also helped to stabilise family life, and thereby so incidences of domestic violence. Most loans are between 5,000 and 15,000 Kenyan shillings, or US$50–150. Some members do not have any skills or experience in business or financial management, but the organisation has managed to work in partnership with the Ministry of Trade to offer training in credit and financial management.

Nonviolence training has been a key tool for the Tuinunane community. Turning the Tide (Kenya), is a nonviolence training programme run by the Quaker community in Kenya. Tuinuane was set up by a group of community allies who received training together. During the training, participants identified the causes of violence in their community, developed conflict resolution skills, learnt how to mobilise a community, and strategies for nonviolent social change. The organisers of this training identified funeral costs as a challenge that many people in their community faced.

The Turning the Tide trainers continue to support the organisation with mentoring, training, and workshops for the organising committee and to new members of the organisation. They sometimes lead trainings before a demonstration or action; the group is again taken through the key principles of nonviolent action, and the trainers support the community in developing actions that will be effective.

Tuinuane’s approach encapsulates the values of a constructive programme. The organisation is committed to building power and strengthening relationships within the community, avoiding outside assistance in favour of building mutual trust and inter-reliance among members of their network. The community is managed and run by the community it serves andshares responsibility for each others wellbeing. Perhaps more significantly, Tuinuane is rooted in the lived experiences of members of its own community – members aren’t just “stakeholders”, they are Tuinuane.

The organisation is deeply committed to economic justice. It is perhaps this value that is most clearly manifested in the daily life and work of the organisation. The table banking system that Tuinuane has adopted allows members of the community to redistribute resources, and the commitment to supporting each other during times of hardship means bereaved families don't have to sell assets such as land or animals.

Tuinuane's short history is rooted in nonviolence – the initial ideas were the product of the founders being trained in nonviolence, and members continue to receive training and direction from nonviolence trainers. The organisation is strongly focused on offering practical solidarity to the less powerful members of their communities that goes some way to address the effects of systemic social and economic injustice. Tuinuane also directly challenges local politicians to do more for their local community.

The organisation faces a number of challenges, which they are working hard to overcome. The rapid increase in membership, and the cost of holding nonviolence training events, means it has not been possible to deliver nonviolence training to all memberships. Similar funding issues have made it difficult to meet rent payments for the regional offices, pay transport costs for leaders travelling between offices or to meet members, and afford modern technology for record keeping.

There are also cultural challenges: typically, land continues to be owned only by men, and women are often not able to access inheritance. The organisation is also learning how to respond when individuals are dishonest and fail to pay back loans.

Let us lift each other

With very few resources, Tuinuane have been able to build a large network of people committed to transforming the livesof members of their community, using their own resources and skills. The organisation is deeply rooted in the lived experiences of its members, and is built on their shared commitment to redistributing resources, serving each others needs, and building a better future. Tuinuane means “let us lift each other”;this is a community experimenting with a variety of methods of “lifting” each other – in meeting their daily needs while building and strengthening relationships, responding to challenges collectively, and taking responsibility for their own lives.